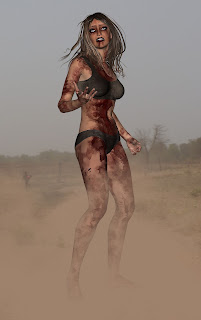 The cool, damp air refreshes me. A thick mist cloaks their graves. The grass along the footpath is heavily laden with dew. Slowly, the mist lifts, heralding dawn in all its glory.

Trees burst into life, sounds, of spring songbirds. A red deer stirs from her slumber, clambering to her feet out of her bed of bracken. I watch a country couple approach. Their black dog sends colonies of rabbits scampering into a hedgerow. The hound rears against her leash, growling, snarling, halting me in my tracks. The countryman has a strong, resonant burr to his voice, he holds her back.

The countrywoman sits herself down beside the moat skirting the graveyard: exhausted, head- between-her-knees, gulping in the invigorating country air. She has had to tread carefully: the footpath is still muddy and slippery after last night’s cloud-burst. She fixes me with an ice-cold stare,

They make an odd-looking couple. The woman can’t keep still, twiddling her shiny chestnut hair, licking her nude lips. She is dressed in a smart ivy-green jacket worn over a plain, knee-length emerald dress with scooped-out neck. Her legs are bare, save for her pair of psychedelic pink-patterned wellies. I notice that she wears a single pearl on a necklace, no sign of a wedding ring.

By contrast, he is garbed all in black: tee-shirt, short shorts, heavy nail boots. A dark, swarthy, man with greasy-grey hair, his sallow face set in stone like the murderer who stands before the noose. His burly arms are plastered with tattoos of weird dancing girls, swirling fiery dragons, rippling cards: crimson diamonds, bleeding hearts, gravedigger’s spades, the sardonic jack of shadows. He speaks in a gruff, nasal tone, like a snuffling truffle-hunter sniffing soil for fungi,

‘Give me a minute to get my breath back, won’t yer?’

I can tell she’s nervous. Nervous of him? Of me? Of it? I can’t say. We all know it will return tonight. It always returns at Beltane. I watch, appalled, as the beast tugs at his beauty’s hair, crudely kissing her puffy lips, savouring her as if she were a delicate rose in bloom. She sneers, pressing her hands flat against her belly. I look away, averting my eyes from their intimate display of affection, still listening, though, nevertheless,

‘Can yer feel them, Jack? Aren’t they lively today?’

The woman clucks like a mother hen on her brood, holding his huge, grubby hands to her belly.

How fortunate is the beast to be in the company of the beauty! What does she see in him?

Suddenly he comes alive and bursts into rustic song:

He fusses over her, not giving me, the aggrieved party, victim of the dastardly hound’s assault, the slightest attention. The black dog refuses to settle. One minute, she pants at their feet: the next, she jumps up and down, barking at me.

Jack glowers at her, ‘She’s smelt a corpse, tha’s what, a dead bird or such like.’

For one awful moment he regards me as if the bloody dog’s tantrums are my fault, then thinks the better of it,

‘Sorry if she frightened yer. Dunno what’s got into her today.’

I shrug my shoulders, eager to be on my way. The strange woman, scared, still staring at me,

Jack butts in rudely before the woman can speak:

I relax my guard a tad, ‘Lovely. Red sky ahead, though. Looks like we’re in for more rain.’

‘Red sky in the marnin’, shepherd’s warnin’, or so they say.’

For the first time, the woman addresses me, ‘Wait a minute, aren’t you the man who killed us?’

I tell her: I’m sorry. Tell her I must go. I hurry towards the stile. Glancing over my shoulder, I see the dog, rearing and tugging at the lead. Her master standing still, freeze-framed by the sun, leering at his mistress. The woman, hunched forward, green of dress and green of face, terrified of him. I distance myself from her as quickly as I can, pausing only to watch him heave her to her feet.

They vanish amongst the mossy graves.

at July 29, 2021
Email ThisBlogThis!Share to TwitterShare to FacebookShare to Pinterest