I love storytelling. I’ve read at parties, BBQs, after Life Walks. I’ve read stories at an organic café on Thursday nights. In September 2019, I was invited to help set up EFDC Community Writing Group. Now called The Mulberry Writers, we still meet at 10am every Thursday morning at The (beautiful) Mulberry House Hotel. And yes, we read our stories!

It seems like only yesterday that I attended the Beginners Writing Course at Brentwood Adult Learning Centre to learn basics such as plot. I consider myself very fortunate. In December 2017, I joined Brentwood Writing Circle. I read a story by candlelight for the Paranormal Day to an audience of fifty, including several highly critical, published authors. My hands were shaking so much, the Chairman had to hold the pages for me. They told me I should keep writing!

Here is an abridged extract from Our Secret Place.

Dear Linda, I found your old diaries this morning. I sat on the rectory bench where we used to meet. The weak autumn sun in my face. Turning the faded pages of a life filled with love and tears. Do you remember the tennis courts where we played when we were young? They’re overgrown now. Covered in moss. Dying leaves. Curling crisps of bronze and gold. Their nets torn to shreds. Like my heart. I closed your book and thought of all the good times we had.

Linda arrived on court wearing a pristine tennis shirt and skirt. And the pretty tortoiseshell hair slide, her mother gave her when she was a little girl. He was slouched on the bench outside the chain-link fence in tattered navy flares, and a floppy tangerine vest which accentuated his hairy chest. He slid back the rusting bar to the gate and came on court. Linda went and stood at the net, po-faced. He was shocked by the change in her appearance. Her lips were split and sore. Her face was pale, haggard and drawn. Black bags clung to her almond eyes like sleeping bats.

‘What’s happened, Lin?’ he said, strolling up to the net.

She bounced a ball on her racket and burst into tears. He brushed her soft cheeks with the back of his hairy hand and held her tight. She loved it when he did that.

She smiled for the first time that day.

‘The cancer’s spread to the spine and organs,’ she said.

Dan was stunned. He didn’t know what to say at first. Struggling to retain any sense of self-composure. When he did speak, his voice was trembling and withered with worry for her. Linda looked so ill.

He put his hands on her shoulders. Gazed into her eyes. And gave her the loveliest smile.

‘I’ll always be here for you. Come on, let’s play tennis!’

Dan spun his wooden racket which clattered to the court’s hard surface.

He called, ‘Rough or smooth, Champ?’

He made her laugh! ‘Smooth!’

He felt the cat-gut strings. ‘It’s rough. I serve first.’

Linda padded to the baseline, hitched up her skirt and scratched the itchy, red rash on her thigh. Dan’s heart went out to her. She was always in the wars. Sniffing, she leaned forward. Twirled her racket. Bit her bottom lip. And concentrated. Linda nearly did the splits trying to reach his first serve. An ace that landed in the far right-hand corner.

Her boyfriend hopped to his left. Before she could settle, he threw the ball high in the air and slammed it out of reach.

Another brutal ace followed. This time to her weak backhand. Then another. Which narrowly missed hitting her in the stomach.

She shook her head.

Lin bounced the ball. One, two, three times. Glanced at him. And smiled to herself. He always let her win. The court was covered in moss. As she went to serve, she slipped and fell. Dan gasped in disbelief. He wanted to wrap her in a shroud - of cotton wool.

He threw down his racket. Leapt the net. Rushed to her side. Kneeling to inspect her wound.

She leaned back on her elbows and watched him pick the sharp, embedded, grit out of her sore knee. Neither of them felt much like playing tennis anymore. Yearning intensely for one another, they left the court and walked hand-in-hand across the playing field. Along a red earth path. Until they reached their hidey-hole-in-the-hedge.

The sweethearts scrambled through the gap into a leafy glade. A lonely, secret, place where sunbeams danced on their faces. They lay in the lush, long grass. Watching a skylark beat its way across the cloudless sky. The sun was at its zenith. Its hot rays seared their skin. Dan took off his vest. Lin gently stroked his hairy chest.

To find out what happened next go to: Is It Today? by HJ Furl on Amazon or listen live at: www.isittodayhjfurl.com

Our Secret Place (photo taken on the outskirts of Bardfield Woods Nature Reserve in Suffolk, England): 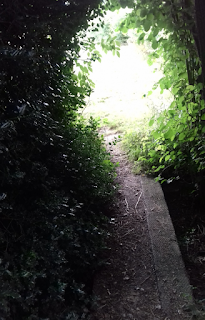 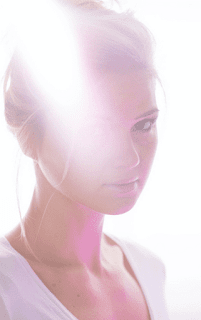 at September 02, 2021
Email ThisBlogThis!Share to TwitterShare to FacebookShare to Pinterest